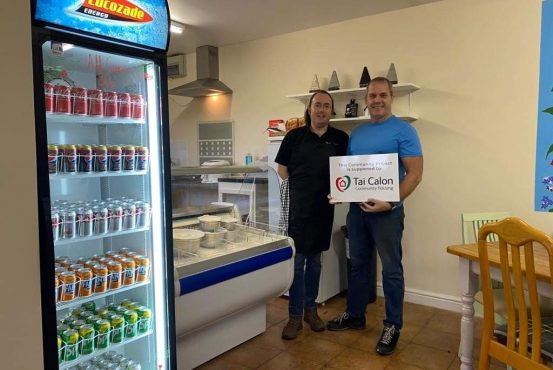 From the age of 17, Matthew was a full-time carer for his seriously ill father which continued for the next 11 years until his father sadly passed away. His father’s death had a very detrimental effect on Matthews mental health and he suffered from severe anxiety and depression leaving him unable to work.

A year ago Matthew met with Darren Foote our Wellbeing Coach, and told Darren that he wanted to work but found himself on the merry-go-round of being unable to find a job due to having no work experience and unable to get a job to gain the necessary experience.

Darren informed him of a volunteering opportunity with a mental health rehabilitation charity called Growing Space, which is a partner of Tai Calon and based in Terrance Gardens, Brynmawr. He was developing a garden and vegetable allotment area.

Matthew accepted the offer and began volunteering with the ongoing support of Darren and the Growing Space Team. Matthew flourished in the role and quickly became a valued team member, often taking on supervisory duties when required.

Before the pandemic, Terrance Gardens had a vibrant tearoom facility that served refreshments and cooked meals for visitors but had to close due to the lockdowans and had fallen into a state of disrepair. Darren Foote, our Well-being Coach, identified this as a potential opportunity and supported Growing Space in securing funding to employ a Café Manager for a 12-month period. Darren then suggested to Matthew that this may be the opportunity he was waiting for. Matthew agreed and completed an application form with Darren’s support and undertook the required food hygiene-related qualifications.

After receiving interview techniques and confidence building training from Darren, Matthew did his first ever job interview at Growing Space Head Office in Newport. After a nerve-racking couple of days, Growing Space informed Matthew that his interview had been exemplary and offered him the job.

The next stage was to get the café deep cleaned, replace some of the kitchen equipment and decide on a menu. This was achieved with the help of Tai Calon’s Wellbeing Team, Growing Space, some local businesses, and a professional chef.

Matthew said that he’s been overwhelmed by the support he’s received from Tai Calon and Darren in particular. He went on to say that he now has a reason to get up in the morning and can live his life with dignity without relying on benefits. He also said that he’d taken out a membership with Anuerin Leisure and is exercising regularly, which has positively affected his mental health.

All work has been completed, and the café is now open to members of the public between 10am-3pm on weekdays. So, if you are in the Brynmawr area and fancy a cuppa or something to eat in or take away at very reasonable prices, please consider visiting Terrance Gardens and supporting Matthew in making his business a success.