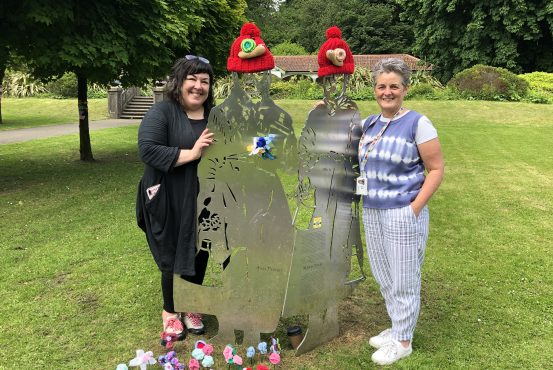 A Yarn Trail was created at Bedwellty House in Tredegar which saw 40 groups and over 400 people get together from the age of 5 to 89, crochet, Pom Pom, knit and natter their way to a colourful show of their work.

The team, including Lynne Webb from Blaenau Gwent Youth Service and Jo Reames from Tai Calon helped put together their creations and from Friday 10th June to Sunday 12th the display was available for the public to view. There were over 800 pom poms made, 500 tassels, and nearly 200 knitted hearts. Sculptural squares and collars for the trees were also made in complete collaboration with the whole community. From knitted squares provided by residents of the area to Pom Pom’d animals made by youth services, the trail was a huge success after years of waiting for it to become a reality.

Lynne Webb said, ‘It has been something that was in the pipeline for 2019, then 2020 but because Covid happened we had to put it on the backburner.’ Although this event has been in the pipeline for over 3 years, they couldn’t have imagined the support they received this year and as a result of the trail, there are now wellbeing craft groups being set up across the borough.

Jo Sims Service Manager for Young People and Partnerships at Blaenau Gwent County Borough Council said, ‘There have been lots of individuals with all sorts of different needs really that have been able to take part in this and I think that’s the beauty of this project – anybody could take part in it. Making the actual things was more around bringing people together – on their own or whether they wanted to do it as part of a community group it meant anybody could take part no matter their ability, their skill or their level of need.’ Bedwellty park was the perfect setting for a very successful Yarn Trail with all the beautiful creations and we hope to do it again very soon in the future.

A very big thank you to all who made something for the trail as well as to those who attended the event throughout the weekend.